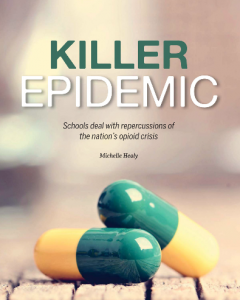 Park City School District Superintendent Ember Conley is featured in the February issue of the “American School Board Journal” produced by the National School Boards Association. She was interviewed for the article, “Killer Epidemic: Schools Deal with the Repercussions of the Opioid Crisis.”

In the magazine, Dr. Conley discusses the deaths of two 13-year-old middle school students who fatally overdosed within days of one another in September 2016.  She quickly learned the “depths and breadth” of the opioid crisis in Park City and Summit County. “We listened to a career drug enforcement agent tell us that this epidemic is the worst drug crisis in the nation’s history,” she told the national publication.

The superintendent emphasized bringing students into the conversation following the deaths of the two eighth-grade students. The article states: “Many students mentioned that they’d only been taught to say no. Instead, they wanted to know the consequences of drug use. The district responded by revamping the drug abuse component of its life skills curriculum, emphasizing the impact of drugs on brain development. It began introducing these concepts to students starting in late fourth grade. The district also emphasized a culture that promotes a safe, healthy, and engaged environment for students and teachers. Programming around mindfulness and yoga have taken off in the elementary schools. There’s been added focus on nutrition and the importance on rest and rejuvenation. A teacher training initiative emphasizes focusing on students’ unique strengths. To help guide and coordinate its increased mental health outreach, wraparound support programs, staff training, and counseling efforts, the district created a new position: assistant superintendent of student wellness.”

“Utah has the highest suicide rate in the nation, the fourth highest opioid use,” Conley told Michelle Healy, associate editor of American School Board Journal who wrote the article. “Our students are coming to us with [an array] of issues. Being able to add additional staff, counseling, training, and conversation has been extremely important.”

Dr. Conley told the magazine that the school board put together a two- to three-year plan to fund the district’s new resources. It also supported the decision to stock all district schools—elementary, middle, and high—with naloxone, the opioid-overdose reversal drug often referred to by its brand name, Narcan. School nurses and first responder teams in each school have been trained in its use, she said.

The American School Board Journal is an award-winning monthly education magazine published by the National School Boards Association.