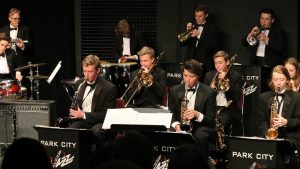 Jazz Educator of the Year: Chris Taylor, Director of Band, has been named Utah Bandmasters Association’s Jazz Educator of the Year. This is the second time in four years he has received this honor. To earn this award, Taylor’s jazz groups demonstrated excellence of the highest degree in the 2016-17 school year. He is one of four educators in the state to receive this award this year, and is the only teacher not from a 5A or 6A high school to receive the award. Taylor will receive his award and recognition at the upcoming Utah Bandmasters Association Conference. In addition to the JV and Varsity Jazz Ensembles, Taylor also directs the Wind Ensemble and Symphonic Band.

Administrator of the Year: Former PCHS principal Bob O’Connor has been named as Administrator of the Year by the Utah Music Educator’s Association. This award was based on nominations earlier this school year, well before O’Connor took a leave of absence from Park City High. His nomination and award is based on his years of continuous support of the Park City High and Treasure Mountain Junior High music programs. “Bob is an advocate for music in every way,” said Bret Hughes, Director of Percussion. “He found a way to be at many school concerts, always came  to wish our students good luck prior to competitions, and was present in New Orleans when the Advanced Percussion Ensemble performed in front of 6,000 people at the National School Boards Conference. He was also on the curb of Kalakaua Ave one year ago when the Marching Band represented Utah in the 75th Anniversary Pearl Harbor Parade. The PCHS Music Department will be accepting the award in his honor at the upcoming Utah Music Educators Annual Conference.

Honor Orchestra of America: Michael Barski, a senior at PCHS, has been selected as a trombone player in the Honor Orchestra of America. This is a national honor group selected completely by blind audition. Barski is one of three trombone players in the country selected to perform with this ensemble. He will travel to Indianapolis, Indiana, in March to represent PCHS and PCSD in the Music for All National Festival where the orchestra performs two joint concerts with the Indianapolis Philharmonic.

All-State Jazz Band: Jonas Peterson, a junior who plays tenor saxophone, and Dylan Wolfe, a senior who plays bass trombone, have been selected to represent the high school in the Utah All-State Jazz Band. The band is an honor group representing all UHSAA classifications of schools based solely on audition. These two represent two of only four students selected from 1A-4A high schools. They will be among the 19 best jazz musicians in the state next week when they perform at the closing concert of the Utah Music Educator’s Annual Conference in St. George.

All-State Band: The Utah Music Educators Association annually recognizes the top 120 band students in Utah by naming them to the All–State Band (some of them also get assigned to perform as part of the All-State Orchestra). The following students from Park City High School performed at the All-State Gala on Jan. 20 at Abravanel  Hall in Salt Lake City: Marco Zanetti, E-flat clarinet; Bailey Landis, bass clarinet; Michael Barski and Nathan Wales, trombone; Connor Ball, euphonium; Jordan Fajardo-Bird and Joe Dinger, percussion. These seven students from PCHS represent more than 30 percent of the students selected from all of the 1A-4A high schools in Utah.