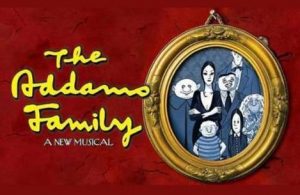 Park City High School’s Theater Department has received six nominations for its musical, “The Addams Family,” performed earlier this fall. This is the second year in a row PCHS have best nominated for Best Musical.

“To be nominated for Best Musical two years in a row is amazing,” said Rick  Kimball, drama teacher and director of the show. Last year PCHS was nominated for “Little Women.”

Performances from more than 70 schools from throughout Utah were judged by theater professionals who traveled across the state to adjudicate high school productions. Park City competed against some schools that are more than twice its size.

PCHS will perform “The Addams Family” at the Eccles Theater in downtown Salt Lake City on Saturday, May 12, as part of the Utah High School Musical Theater Awards. “These awards are like the Tony Awards for high school theater,” said Kimball.

All finalists will perform during the May 12 award ceremony. Best Actor and Best Actress will receive an all-expenses paid trip to New York City  to compete at the national level. Scholarships will be awarded to the Best Supporting and Best Cameo winners.