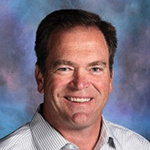 Highly respected school leader Park City High School Principal Bob O’Connor shared Thursday, Jan. 11, that he will not be returning as principal at the high school in order to address health concerns.

“I want to thank all of you so much for your concern and support over the past several weeks while I’ve been going through a series of screenings and tests to diagnose my health-related symptoms. My doctors have discovered evidence of a neuromuscular-degenerative disease that requires me to seek multiple care plans and treatments. It is in my best interest to take medical leave to fully explore treatment options. Due to the nature of my health issues I will not be able to return as Principal of Park City High School.

“I am proud of my 21 years of service in leadership roles in the Park City School District. My latest service as Principal for the past six years at Park City High School is reflected through the numerous accomplishments of the entire faculty and student body.

“The students at Park City High School offer me hope for a brighter world full of music, scientific discoveries, athleticism, diversity and environmental stewardship. Their love and enthusiasm are infectious, which is something I will cherish forever.”

Superintendent Ember Conley announced in November that Mr. O’Connor was taking leave. Kathleen Einhorn was named interim principal. Dr. Einhorn will serve as principal the remainder of the 2017-18 school year.

“Mr. O’Connor is a highly respected educator and administrator. He is a role model for advocating for children and his staff.  His exemplary service as a leader in the district will be irreplaceable. He is a advocate and champion for students.”

The district will post the position this month and begin the search for a new high school principal. The district will screen applicants and interview in March with the replacement announced later that month. A hiring committee will follow district policy with a balanced team of teachers, parents, administrators, and board members.