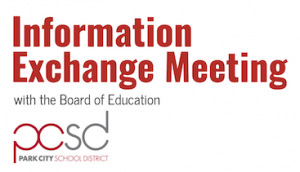 The Park City School District Board of Education members hosts monthly informal meetings so that it can engage parents and members of the community. The following items were discussed May 10 at Park City Learning Academy with board Vice President JJ Ehlers and board member Erin Grady. This was the final exchange meeting of the school year.

Late Start on Mondays at TMJH and PCHS: A parent asked for more details regarding the possibility of a late start next year on Mondays at Treasure Mountain Junior High and Park City High. She wants to know the rationale behind this change and how it will impact transportation issues. She encouraged the District to communicate this information to parents as soon as possible so they can begin planning for next year.

Standards Referenced Grading: A parent questioned the benefits of standards referenced grading. She said that not all teachers are educated about how it works, even though it has been piloted at Ecker Hill Middle School. The parent believes there is not a buy-in from faculty because the new grading will require teachers to restructure how to grade assignments. She does not want more stress placed on teachers and believes it needs to be rolled out slowly. Ehlers said the decision to move to this new system was made by the Professional Learning Communities at the schools.

Update on Selecting Superintendent: Five candidates were interviewed May 5 by the board and a 12-member community committee. The board narrowed the field of candidates to two finalists and Saturday, May 12, conducted a final round of interviews. Ehlers said both finalists were both approved by the community panel as well as the board. The board will issue a public statement about its selection once a decision has been made, and the board’s consultants have completed its due diligence.