Park City School District is nestled in the mountains of the year-round resort town of Park City, Utah. The district’s mission is to empower students to develop their knowledge, skills, and potential as critical thinkers. We maximize resources for academic rigor and excellence through staff, programs, and technology that make learning relevant in an emerging world.

PCSD affirms its commitment to provide a physically and emotionally safe environment for all students, regardless of race, religion, national origin/ethnicity, color, sex/gender (including sexual orientation and gender identity), pregnancy, age, disability, or any other basis prohibited by applicable law. PCSD holds itself accountable to these standards and expects students and staff to adhere to these standards. The district leads by example as it celebrates all students in the district.

PCSD is recognized as one of the premiere districts in the country and has received numerous accolades including:

-A 95% graduation rate — more than 10% higher than the state average, and in the top 1 percent of the nation.

– Ecker Hill Middle School was re-designated in 2019 as a national School to Watch. The honor is bestowed upon the administration and faculty for their exemplary work with young adolescents. Only 11 schools in Utah have received this distinction.

-The high school Marching Band and Color Guard traveled to Normandy, France, in June 2019, to perform at the 75th anniversary of D-Day.

-Park City High School is one of only three high schools in Utah to earn a gold medal in the U.S. News & World Report’s 2017 rankings.

-A top Advanced Placement district in Utah with a 75% student participation rate and a 70% pass rate.

– Graduates outscored their counterparts in Utah and across the country on the 2018 ACT with a composite score of 23.7, compared to Utah’s composite of 20.4 and the national composite of 20.8.

-Successful and rigorous dual language immersion programs in Spanish and French (grades 1-9). The district celebrated its 10th year of DLI in 2018-19.

-The Board of Education received the Master Board Award in 2019 from the Utah School Board Association.

-Jeremy Ranch Elementary was recognized as a National Blue Ribbon School for 2017, the first school in PCSD to receive the prestigious honor.

–A delegation of educators from the Japanese government’s Ministry of Education, Culture, Sports, Science and Technology toured schools in 2019 looking at the district’s impressive STEM programs.

-PCSD was named an Apple Distinguished Program for 2014-16 for implementation of its “one-to-one” initiative that supplies students (grades 2-12) with laptops to use in the classroom and to take home.

-An active partner in the annual Sundance Film Festival held each January. The Sundance Institute, founded by Robert Redford, offers Filmmakers in the Classroom Program. Each year Sundance offers students the opportunity to celebrate the art of cinematic storytelling. Students view short films, and have opportunities to interact with both emerging and established filmmakers from around the globe. 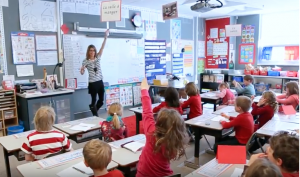